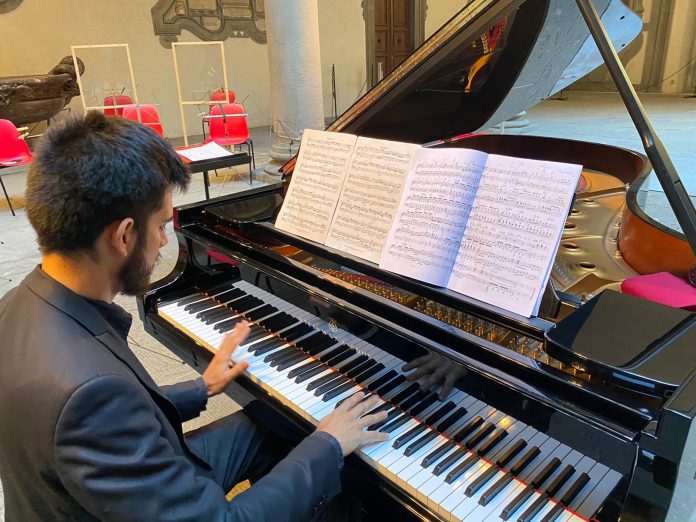 Classical Tuscany Orchestra: homage to George Gershwin
On 15 and 16 July, 9 pm, in the courtyard of Palazzo Medici Riccardi, Firenze

The father of the American musical and the essence of jazz, an extraordinary pianist and composer able to reconcile cultured European music with popular overseas music.

George Gershwin was this and much more. The Classical Tuscany Orchestra pays tribute to his repertoire steeped in cinema and theater, on Wednesday 15 and Thursday 16 July (9 pm) in the courtyard of Palazzo Medici Riccardi.

Two evenings to listen to “Embraceable You”, “But Not For Me”, “Summertime”, “Someone to Watch Over Me”, “I Loves You Porgy”, “I Got Rhythm” and other songs that have marked the twentieth century imagination .

The conducting is entrusted to Stefano Teani, a young baton from Lucca who has made the synthesis between technique and expressiveness his distinctive trait. A pupil, among others, of Günter Neuhold and Gustav Kuhn, he conducts both symphonic and operatic repertoire. Among the many experiences, it is impossible not to remember the one on the podium of the Chamber Orchestra of the Maggio Musicale Fiorentino.

At the piano we find Fernando Ramsés Peña Díaz, protagonist of this season en plein air of Toscana Classica, to whom we also owe the arrangements: pianist, composer and arranger, he graduated in classical piano with full marks at the University of Colima in Mexico and is one step away from graduating in jazz piano at the Santa Cecilia conservatory in Rome. His career, which began at an early age, is studded with awards and accolades. He boasts numerous international experiences and his music is performed in the United States, Italy, Finland and Mexico.

Another young talent, that of Elena Di Leo, who is entrusted with the vocal parts.

The Classical Tuscany Orchestra is made up of young orchestra professors, trained both in Italy and abroad. Since 1999 he has had over 500 concerts to his credit. Since 2015, the Ministry for Cultural Heritage and Activities and Tourism, recognizing its merits, has included it among the Youth Music Production Orchestras.
Evenings as part of the “Musical Wednesdays of the organ and surroundings” festival, created with the decisive contribution of the CR Firenze Foundation, the Ministry of Cultural Heritage and Activities and Tourism, the Tuscany Region and the Municipality of Florence, with the patronage of Metropolitan City of Florence.

Tickets 20/15 euro – presales at the Box Office Toscana points and online at www.ticketone.it. Pre-sales service also at Palazzo Medici Riccardi on concert days, from 10 to 13 and from 15 to 21.

Reductions are available for students (with ID card), over 65 (with ID), holders of the “Firenze Card” of the Municipality of Florence and Unicoop Firenze members.